CONCLUSION TO THE PRECEDING SECTIONS

This website is meant to be merely an introduction to homeopathy and health care. As such, it is by necessity eclectic. There are uncounted references which support the claims made here, which space constraints have made impractical to include. The following are just a few examples.

Again, these are only a few highlights which hit the cutting room floor while making this website. There is much more information out there for you to discover; it is simply a matter of finding it.

We have taken a brief look at western medicine, in particular how it applies to homeopathy. Allopathic, or conventional mainstream, medicine developed at least from the time of Galen and evolved with civilization. This evolution included a marriage with science during the Renaissance, and a division between academic and empirical medicine developed. Allopathic medicine became increasingly subjugated by capitalism in the post-industrial revolution era, and a profit-driven medical racketeering network formed between the pharmaceutical industry, the medical industry, the scientific community, and key U.S.A. government agencies under the pretense of providing consumer protection and scientific health care. Consequently, all cheaper health alternatives to the network were squashed. The power and impunity of the racket has reached the extremes of being comparable with war crimes, where profitable mass human experimentation and homicide are fraudulently performed in the name of scientific medical advancement and health care. In its secure racketeering position, the simplistic mentality of allopathic medicine has exhibited little fundamental change since the nineteenth century, and its techniques have proven to be harmful not only on an individual scale, but also on a global scale. As such, it presents a major threat to the future of humanity. As the world becomes politically more unstable and imbalanced by iatrogenically induced intropy, no realistic hope of help from allopathic medicine can be expected. With no end of all of this in sight, the singularly most effective alternative is homeopathy.

Homeopathy, which also has its roots in antiquity, developed along an empirical rather than an academic line. It finally culminated into a comprehensive system of medicine in the early nineteenth century due to the efforts of Samuel Hahnemann. Although homeopathy enjoyed considerable empirical success, the lack of a scientific explanation was used as an excuse by the greedy and bigoted allopathic community to suppress the results. Philosophical division within the homeopathic community, combined with the actions of the profit-driven medical racketeering network, drove homeopathy into obscurity for nearly a century. The current situation created by allopathic medicine has prompted an increasing number of people to rediscover homeopathy, whose empirically driven approach relies on a much more sophisticated view of disease and health care. The popularity of homeopathy will continue to increase as people take up the fight in the war of medical human rights which was instigated by allopathy, not only for themselves but also for their posterity. 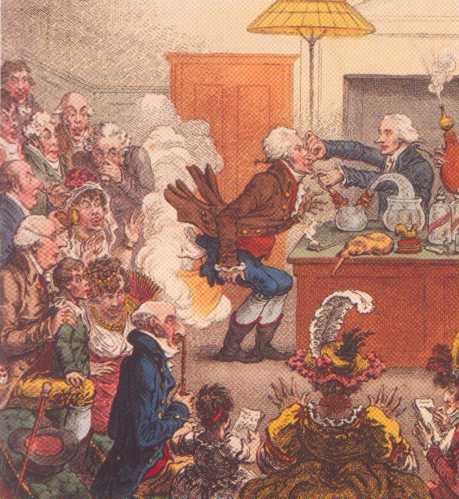 The Powers of Air

After having read all of this, people can ultimately reach one of only two resolutions: denial or acceptance. For those in the denial category, all I can say is, "Good luck, and the world thanks you for your contribution to the Exclusion Principle". For those in the acceptance category, you will appreciate the following.

Parodies of medicine may be as old as medicine itself. This 1802 cartoon by James Gilray is called New Discoveries in Pneumaticks! - or - an Experimental Lecture on the Powers of Air10:62. Such wit is a typical reaction to the so-called scientific advances in allopathic medicine.

In keeping with the allopathic method of naming everything they see, I have decided to "diagnose" the state of medicine as the O. J. Syndrome. Everyone remembers the farce of the "trial of the century" involving O. J. Simpson, who murdered his ex-wife and her boyfriend. As the prosecution presented the preponderance of evidence against him, O. J. proclaimed his innocence, saying that he didn't know who killed them, but that he wouldn't rest until he did. Upon his release, O. J. demonstrated his sincerity by playing golf every day. When one of the jurors was asked at a press conference to explain her decision, all she would say is for people to read about the explanation in her book, which would now be written thanks to the book deal she coincidentally just signed. Even though every honest and intelligent person on the planet knew O. J. was guilty, all they could do was dismiss the situation with inanities such as, "Well, we can't change the system. We'll just have to wait until someone comes up with something better". The fact is that if people were honest and sincere, the current system could be made to work.

The problem with that statement is with the word "if". As long as people remain in a state of denial, the state of medicine will not change. In most cases, people reading through this website will be no more convinced about the necessity for homeopathy than they were beforehand. Perhaps Elbert Hubbard described this best when he said, "Never explain- your friends do not need it and your enemies will not believe you anyway14:392". You might ask, "Then why did you go through the trouble of making this website?" My answer is that while I might not convert any enemies, I might at least make some new friends. The rest will implicitly share the allopathic view of the world, which is not unlike that of Joseph Stalin's, who is attributed to have said, "One death is a tragedy; a million deaths a statistic14:736". The similarity cannot be denied when one considers the allopathic tendency to manipulate statistics in order to justify their actions, which often have fatal results on a massive scale that are nevertheless safely ignorable.

There is absolutely no doubt in my mind that if Hahnemann were alive today, he would rant as much about allopathic medicine as he did during the days of venesection and purgatives. The status of medicine cannot easily change any more than can the nature of man or the world. I wonder how much Albert Einstein appreciated the implications of his own statement when he said, "The distinction between past, present, and future is only an illusion, however persistent"14:291. Nevertheless, that does not prohibit one from acting on an individual level, and from doing what one can to help those who will accept it. I learned a long time ago not to depend upon other people in this respect, as my nearly fatal stay in the emergency room taught me, but at least I can inspire a different feeling in others.